What’s it named after? This used to be a tailor’s shop, once upon a time. When Sidcup had tailors, that is.

We come to Sidcup in two different ways. One of us goes to  The Hopper’s Hut, one of two new micropubs in the area (the other is The Hackney Carriage, the other side of town). The Hopper’s Hut is glorious – it’s friendly, sells lovely beer and cider, and is so peaceful, a baby snoozes through our visit. You should drop whatever it is you are doing and go there. Now.

The other one has a more traditional local greeting this All Hallows’ Eve. After being spat at on the bus, she has an egg chucked at her on the high street. Welcome to Sidcup.

Despite a fortune spent on sprucing up said high street, it’s eerily quiet here. It’s the kind of place where you listen out for footsteps behind you.

When we pass earlier in the evening, there are two big groups smoking outside The Tailor’s Chalk – one all-male, one all-female. When we return to go inside, at 10pm, the only other women in sight are the friendly duo behind the bar. The Poundland Hallowe’en decorations (don’t sneer, they’re good value) are already coming down.

The Tailor’s Chalk is a relatively new Spoons. This used to be a grim Hogshead, but it was closed and reopened by JD Wetherspoon in 2009. Micropubs aside, drinking options in Sidcup have always been limited – the area’s main pub, The Black Horse, was closed after trouble and has been demolished; The Portrait, up the road by the scene of the egg throwing, still has a bad reputation.

So after all that, the Tailor’s Chalk should feel like a sanctuary, surely? Not really. There’s a big group of men – some still in builders’ gear – dominating the bar area. You can feel yourself being stared at. We get a (very cheap) round – lovely Liberation Pilsner is still around after the ale festival, the standard Spoons wine is on tap – and scurry off to a corner.

This feels like a newer pub. The carpet’s still got some bounce, the upholstery’s still soft, and the lighting is much brighter than usual. Almost too bright, as there’s a spotlight right on our table. There’s a raised area at the back, but this is smaller than most Spoons. Some of the seating is a bit mix and match – this is probably the closest Sidcup will ever get to having the “shabby chic” of an Antic pub, although at least these chairs look fully stuffed. The noise from the builders dominates the room.

Apart from the builders, and a couple of guys trying to have a quiet drink, the customers are all older men on their own. They’re supposed to climb the stairs to use the gents’, but some are visiting the downstairs disabled loo instead – Radar key not required, despite the sign. 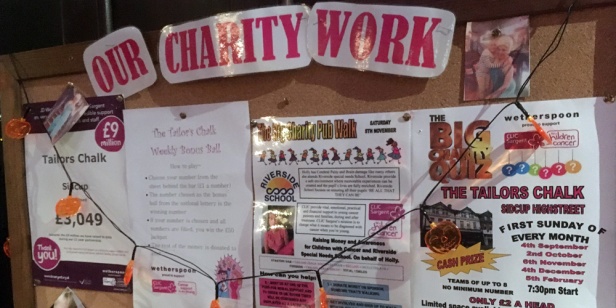 There’s a sign telling us the art has been specially commissioned from Terry Chipp, and biographies of local luminaries include composer and suffragette Ethel Smyth. There’s loads of community stuff on the walls here – it looks like this has become Sidcup’s main pub.

The builders leave at about half-past ten, and the pub becomes unsettingly quiet. We are the only people having a conversation. Even if the sound of the air conditioning drowns out our discussion.

There’s no bell for last orders, and we’re surprised to be given a friendly “five minutes, guys” at a quarter past eleven. An application to open the pub later was refused after objections from local miseries, while their offspring were probably lobbing eggs at strangers on the high street.

We probably picked a bad night. On other nights, and in other locations, this would be a fantastic and cosy little den. But this is Sidcup on a Monday night. And it’s Halloween to boot. It’s dead. Time to drink up and go home and… arse, we’ve missed the bus.

What is World of Spoons?